What would it mean to transfer human consciousness into a robot body? Do we look before we leap when we develop new technologies? What makes us human? Screenwriter Rob Merritt asks these questions in the movie Amelia 2.0. The plot goes like this: When cop Carter Summerland is approached by the Wesley Corporation, who want to copy his comatose wife Amelia’s brain and put it into a robot body, is the result still Amelia, or something else entirely? Amelia 2.0 was the screen adaptation of Rob’s play The Summerland Project, which premiered at Theater Cedar Rapids in 2011.

Rob will be leading a Fireside Chat about the themes of Amelia 2.0 during EntreFEST Visionary Day, Friday, October 13, 2017. I sat down with him to chat about the big questions raised in Amelia 2.0 and how we use science fiction as a way to explore the impact tech can have on the world. Here’s a small preview of some of the things that will be covered in his Fireside Chat.

This interview has been edited and condensed.

Could you tell me a little bit about this project, Amelia 2.0? Why would that project create conversation around tech?

There’s other stories that deal with the idea of humans transferring their consciousness into a machine. I mean, that story has been done, but usually they take place in a very futuristic world. What I thought was kind of fascinating was looking at the technology we have now, and realizing that in some areas were actually getting kind of close.It was something that I’d wanted to explore for a while, the idea of; if you had the chance to bring back somebody would you do it? But I couldn’t figure out at the time how to tell that story without it being some sort of weird ghost story, or spiritual thing, and I was like I don’t want to go down that road. Everybody’s gone down that road.

It all kind of started in summer of 2010, I think. I was reading two articles right around the same time. Reading both of them kind of started me down this path. One of them was talking about how, because the human brain is made up of hundreds of billions of neurons, and they’re all electrical impulses, that there is this theory that you could actually replicate the human brain, if you had a computer that was big enough, and fast enough to do it.

Computers are getting faster and faster all the time…

The argument has been that if [computers keep advancing at their current rate] then a machine that could do this, we’ll have it within the next…. fifteen, twenty years. Now the amount of effort it would take to actually perform a scan like that is still huge, but at least from an equipment standpoint you can do it. There’s already a lot of research projects like that that are under way.

There’s the Human Brain Project, which is actually attempting to fully create a model of the human brain, with the idea of using that to study things like Alzheimer’s and other [brain diseases]. If you could fully replicate just a functional model of the human brain, not necessarily consciousness, then you could start to learn how neurons work, how the brain processes information, and then based on that figure how to treat it. And figure out what isn’t processing correctly.

If you entirely modeled a fake brain would it be alive?

Welcome to the weird ride I’ve been on for the last six years, because that’s exactly the question I asked! If you can do this, if you could actually replicate a brain, what would you have? Would you just have a really impressive copy, or would you actually be copying a person?

There’s a whole movement called Transhumanism that explores that. The whole idea behind transhumanism is escaping the limits of the human body. Whether it’s implants that allow you to have increased function, [like] being able to run faster. They’ve talked about implants to human eyes to give you better vision. Things like that, and it goes all the way up to the ultimate goal of transhumanism, to escape the human body completely. And you would have to be able to replicate human brain in order to do that.

This isn’t a far away sci-fi thing anymore. That was kind of my vision with creating The Summerland Project. Trying to set it in a world we knew. This isn’t Ghost in the Shell, this isn’t Blade Runner, where you have the massive set design of a very futuristic world. This is a tech company that is taking innovations we currently have and just pushing them farther.

That’s sort of the way that technology actually progresses right? If you look around someone’s house that house might be from the sixties or seventies it’s gonna have two laptops in it, a big flat screen TV, and an Amazon echo in the kitchen. Tech invades the spaces that already exist.

Right. The other thing that is fascinating about that is technology just keeps coming out. It just keeps advancing and we adapt our lives to fit it, as opposed to us all sitting down and saying okay, ‘what’s the best thing for us to do, and are we ready for this?” Instead it’s just a race for innovation. And there’s all kinds of examples of us seeing if we can make it first, before we ask, ‘should we?’ I don’t know this for sure, but I’ve heard that one of the last things that Oppenheimer said on his deathbed was that he regretted inventing the atomic bomb. Because of how it completely changed everything, and because it’s an incredibly destructive thing. But their mission was build it. It wasn’t alright, let’s talk about whether we should have an atomic bomb. it was build it, and then once it’s built will figure what to do with it.

Is science fiction the way what we explore those effects?

I think science fiction been used very effectively for that. Coming up with the project, I realized growing up as a kid I was watching movies like Robocop, stuff like that, that messed with some of those questions. It was really exciting for me when Theater Cedar Rapids did The Summerland Project. After every performance you could go out into the lobby and people were just debating about stuff that was in that play. I really, really tried when I wrote it to not take a stand one way or the other.

That whole question you were asking earlier, “if you copy a brain is it human or not?” That’s the central question of the play. So, the whole idea is, ‘we can make a perfect replication of her brain and put it in a body that looks just like her old one.’

Then the question is, is that saving her life? Or did she die when her body died? And now, do you just have a computer that looks like her, and seems to remember things that she remembered? It opens up questions from spirituality, to business ethics, to just, all over the place. There were so many interesting discussions that happened as a result.

I had a lot of people ask me, “how do you come down on it? Was Amelia human or was she not?” Only, I’m not telling you. That’s the whole point. I wanted it to be an even handed look at this issue, because no matter how you feel about it, I do think that there is a strong possibility that we could face a question like that for real.

What are some of the things I would change? I know what jumped out to me, you would have people who would be functionally immortal.

It raises questions of, do we have a soul? If you can copy a human brain then, in theory, we don’t. Because you’re basically saying all we are is what we are right now. That is a central tenet of Transhumanism. Transhumanists typically are atheists who do not believe that there is any sort of afterlife or spirituality. They’re like if, ‘we don’t figure out how to escape the human body them when we die – that’s it.’ So that’s one of the big motivating factors behind what they do.

And on the flipside if there is a heaven, if there is a place that our souls go, then copying a human brain, well, what the hell is that? You know, did did the person actually die, and now you just have a computer that is doing a really good imitation of them? I mean those are just some of the questions that open up.

Then you think about it from a legal standpoint. Right now someone has to be declared legally dead in order for you to harvest organs from them. So, in order to take someone’s brain and scan it they would have to be declared legally dead first. So if you go and you make a robotic version of them, does that robot have any rights? Is it still considered a person? You know, all of a sudden it throws the whole legal system on its head.

If the company builds a robotic version of a human being does the company own them? It’s their parts, their technology, their research, or does that person? Because supposedly they’re human. What happens if it turns out you can take a brain pattern and make multiple versions of it, and you can make five versions of the same person? Which one’s the real one? I mean all of a sudden you ask one question which leads to ten more, which leads to ten more, and you’re like oh my god, this is huge!

If you destroy one of these things did you commit murder? Or did you just damage property? If if you destroy one and they take the brain pattern and put it into another body are you still guilty of murder? Or, oh wait, no. We made a second one so it’s okay. Now you’re not guilty of anything.

Then there’s all of the questions about worker ethics. You think about OSHA, things like that, all these things that are in place to protect us as far safety goes, but you go and you build an artificial version of human that doesn’t need to breathe, doesn’t worry about air quality…

Doesn’t have to feel pain.

Yeah, exactly! Doesn’t feel pain. Doesn’t have to eat. You can start arguing about what do I need to pay? You know, you’re perfectly able to function without the basic needs that humans have. There’s just so many ethical, moral, economic, spiritual questions that go into something like that and it’s fascinating. You can have debates with people about it for hours and hours and still not get into everything. I think it’s just it’s a fascinating topic and it it made for a great story in the play and in the film and I think it will make for a good subject in discussion.

Want to hear more from Rob Merritt? Join him for a Fireside Chat! Get your tickets now for EntreFEST Visionary Day, Friday October 13, 2017. [/text_output][/vc_column][/vc_row] 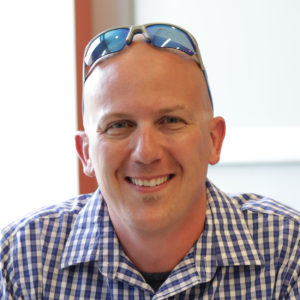 PrevPreviousBuilding Regional Networks: Week 11 Review
Next10 Easy Ways to Not Be a Creep at a Networking EventNext