Each Veterans Day, I find myself reflecting on my experiences and development as both a leader and a human being from my 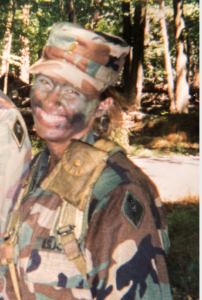 time in the military. I worked with the most diverse group of men and women, and learned the value of different perspectives, voices, ideas and traditions. I entered the US Army as a 21-year-old from a small town in California, and left it a veteran with multiple combat patches, awards, and immeasurable personal and professional growth.

Since I joined NewBoCo in September 2019 I have been digging deep into innovation, entrepreneurship, and the resulting combination of Intrapreneurship. Intrapreneurs have the ability to think like an entrepreneur inside of an organizational framework.

As I explored what this meant in the context of what we do at NewBoCo, I realized I have operating as an Intrapreneur my entire career. I just saw it as a natural part of my work.

As a military officer, I was often called to figure things out. One particularly “fun” assignment was to design a way to meet the demand for remote location latrines (restrooms) while on deployment in Afghanistan immediately after 9/11/2001. The latrines needed to be able to be carried by pallet under a helicopter and dropped into remote locations where we didn’t have land routes established. Not a terribly tough challenge if you are an engineer, I’d imagine.

I am not an engineer.

At the time I had a degree in criminology, as well as basic and advanced officer courses in logistics, under my belt. Nevertheless, I was the deputy logistics officer for the region, so it became my challenge. With no engineers in sight to rescue me, I drew a design on a blank piece of notebook paper and found a few people to review the design. We looked at capacity, bench sizes, hole size, height, width, and weight. It needed to be easily constructed by two people and sturdy enough to sustain dropping from the helicopter.

After some adjustments, we constructed the prototype and sent it “downrange” to be tested. Customer feedback on the prototype was not positive to say the least. It was too heavy, too hard to construct, too many shiny pieces, not relocatable, and overall just not what they wanted. We received a lot about what they didn’t like about it. We made some adjustments and tried again.

Reviews were slightly better, but we were still missing the mark. In the meantime (because when do we really get to do only one job?), I am responding to at least 50 other situations a day with transportation challenges, backordered supplies, an angry downrange commander who just wants more water for his base and another who needs ammunition. I mean, we were at war. Not to mention local concerns of troop movement and the administrative reporting to our higher command.

Eventually, we addressed the need in alternate ways, as it was clear my criminology degree and imagination were not going to design a satisfactory product. But my other skills could figure out how to source solutions – and we did.

This is innovation. It doesn’t happen in a clean room without distractions. It happens because someone needs you to get creative and address a need.

Innovation is need-driven. It isn’t an abstract “something” you do separate from the rest of your work. It is integrated into the role you perform, and you figure out how to address the need with the resources you can generate. I never questioned the need to get creative, generate ideas, test the options, iterate with changes and move forward with small- or large-scale innovations to the work I was doing. It is part of what I do, no matter where I work.

I guess I have always been an intrapreneur. You can be, too. Look around; where are the needs in your organization? What are your customers or clients asking of you? Do you have the tools and resources to address those needs? Or – like my situation above – are you needing help?

To wrap up the story of the latrines: Eventually the discarded designs went into a pile to be used as scrap. For the rest of the deployment, people would talk about using scrap from “The Murph” for their project. I mean, if you have to be known for something, why not a crappy toilet design?

I am proud to be a veteran, and to have served my country for a decade. The experiences I had in the military continue to prove valuable in my daily work more than a decade later. Lessons of discipline, crisis management, leadership, organization, collaboration, and more came to me early in my career. I am fortunate that the military exposed me to the diversity of the world around us and the range of opportunities to grow with as a leader.

At NewBoCo, we focus on generating this kind of mindset, and it can become second nature for your emerging leaders as they address the challenges and opportunities in your organization – without having to send them to a combat zone. Let us know if you’d like to learn more at innovation@newbo.co.